A Basic Guide to 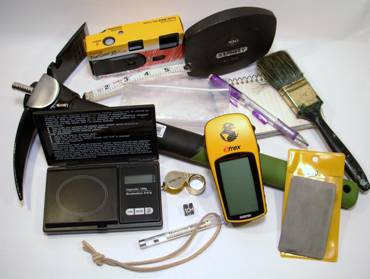 2.  Are there different kinds of meteorites?

4.  What else makes meteorites different from Earth rocks?

5.  What tools do I need to find meteorites?

6.  Where do I look for meteorites?

7.  What should I do if I find a possible meteorite?

A meteorite is a lump of minerals that formed in space then fell to Earth in a blazing ball of fire.  If you see one of these plasma balls in the sky, it is called a meteor and does not become a meteorite until it lands on the Earth. Not all meteors make it to the Earth’s surface. Most burn up completely, high in the Earth’s atmosphere.

Some folks like to study the science hidden deep inside the meteorite, while other folks just enjoy the beauty and the pleasure of collecting them.

2. Are there different kinds of meteorites?

There are three major types of meteorites. The stone (stony), the stone-iron and the iron meteorite.

The type and how long the meteorite has layed in the ground will have a lot to do with what a meteorite looks like when it is found. If a meteorite is recovered soon after it has fallen, signs of the fiery trip will be all over the outside surface. Most fresh meteorites are dark brown or even black and typically have a dull to semi-gloss look.

Heat from the ball of plasma was so hot that it melted the outside minerals and formed a burned sort of glass called the fusion crust. This layer of crust is very thin on the stone meteorites and even thinner on the iron types.

While the meteorite was still a burning meteor blasting though the sky, melted pieces were blown off, forming depressions like a thumbprint in soft clay.

These marks are called regmaglypts (reg’ mag lips).  Meteors of the stone type also tend to blow apart as they get into the denser atmosphere about 5 to 10 miles above the ground. This causes the pieces or fragments to have a slightly broken look but will still be covered with a fusion crust.

If for some reason the meteor of any type stops tumbling for a while, a melting flow might occur and this will be seen on the surface of the meteorite as flow lines.

Unfortunately, the longer a meteorite lays in or on the ground, the more the Earth’s elements will attack it, changing how it looks.  Moisture will cause the iron to rust, blowing sand will act like sand paper to remove the fusion crust, and the heat and cold will cause cracks letting in more water to cause a change in the minerals inside. The iron type of meteorite, being mostly metal, tends to resist water getting deep inside and rusts more slowly.

The iron and stone-iron meteorite types will loose their dark grey-blue fusion crust and most often have a flakey red-brown rusty surface after a few years of damp weather.  If conditions are right, a black type of rust will form under the red-brown rust called magnetite. This tends to be a good thing as magnetite is denser and helps to keep moisture out, thereby slowing the rusting process.

4. What else makes meteorites different from Earth rocks?

Most meteorites are heavy for their size compared to common Earth rocks. This is because most meteorites contain iron - nickel metal.

Chipping or grinding away a small portion of the meteorite will expose the shiny iron – nickel metal.

5.  What tools do I need to find meteorites?

All you really need to find meteorites is a good set of eyes and know what to look for. A good meteorite candidate would be a burned looking rock having a very dark brown or black surface with smoothed over edges. This will rarely be the case.  Most finds are weathered meteorites just looking like a rusty rock, so a few tools might help.

Here is a list of tools from most to least important. 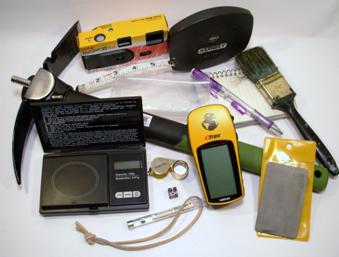 A) Magnetic wand / cane - Most meteorites contain iron; they are attracted to a strong magnet.

B) 10X Loupe – Magnify small details like chondrules and bits of fusion crust.

E) Rock hammer – For digging or chipping a specimen.

G) Camera – record your find and how it looked where you found it.

I) Notebook & pencil – record details of your find.

J)  GPS unit – Pin point the exact location of your find as this maybe a strewn field of more.

K)  Pocket scale – helpful if there are multiple finds.

6. Where do I look for meteorites?

Meteorites land every day somewhere on the Earth, but because the Earth is ¾ water, ¾ of them end up in the water and are never recovered.

A great place to find meteorites is where meteorites have already been found. Many meteors explode in the lower atmosphere, causing fragment to fall, forming an elliptical shaped strewn field. These areas maybe private property, so be sure to get the landowner’s permission first.

Most deserts are good hunting areas for meteorites mainly because there often is less rain fall that supports vegetation making searching more difficult. The dryness also helps to preserve meteorites.

There are only four states in the USA where meteorites have not been recovered to date. These are the forested, small area states: New Hampshire, Vermont, Rhode Island and Delaware.

Other areas to look would be stonewalls, farm fields, backyards and even city streets and parking lots! Meteorites have been recovered from all of these areas.

7. What should I do if I find a possible meteorite?

Use the equipment you have with you. 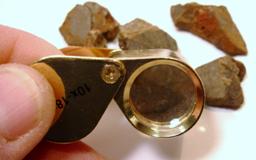 Without disturbing the find, test with a magnet. If attracted, this may be meteoritic.

Photograph the specimen as found with something added (coin, ruler, 1cm scale cube, etc) for scale and indicate North with a marker of some sort.

Carefully extract the specimen and examine in more detail using a 10x loupe. 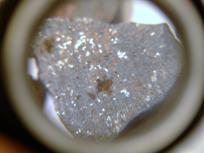 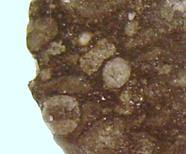 Grind away enough of the specimen to make a small viewing window about 5mm and look for chondrules and metal flakes.  If it still looks meteoritic, record the location with landmarks and or GPS coordinates.  If possible, weigh the specimen. This helps in case specimens get mixed up, you can then sort by weight.  Bag the specimen and include a note to indicate location just in case you have multiple finds.  Small details can be important. Be sure to take a moment to recheck your data.

You won’t, that is unless you have and know how to operate the expensive micro probes and other analytical testing equipment.

If you really think you have found a meteorite, then just do a search for “meteorite testing” on the Internet. This should provide you with a number of places that you could submit a piece of your find. Most labs have a reasonably fee for this service. Some will even test for free if you provide a large enough sample for them to keep, 20 grams in some cases. Be sure to have compiled all the data and photos of your find, as some or all of this information will be needed for the submission process.

Before you go to all that effort, have a look at these meteor – wrongs and check the Internet for more examples. Happy hunting!

Note: some specimens are attracted to a magnet but are not meteoritic!

6. sandstone, 7. fulgurites (glass caused by a lightning strike in sand), 8. lava, 9. man made magnet, 10. obsidian, 11. asphalt, 12. pudding stone, 13. tektite [while scientists believe these glass rocks were in space, most do not consider these to be a meteorite as they lack a fusion crust. They do often exhibit great regmaglypt (thumbprints) though].